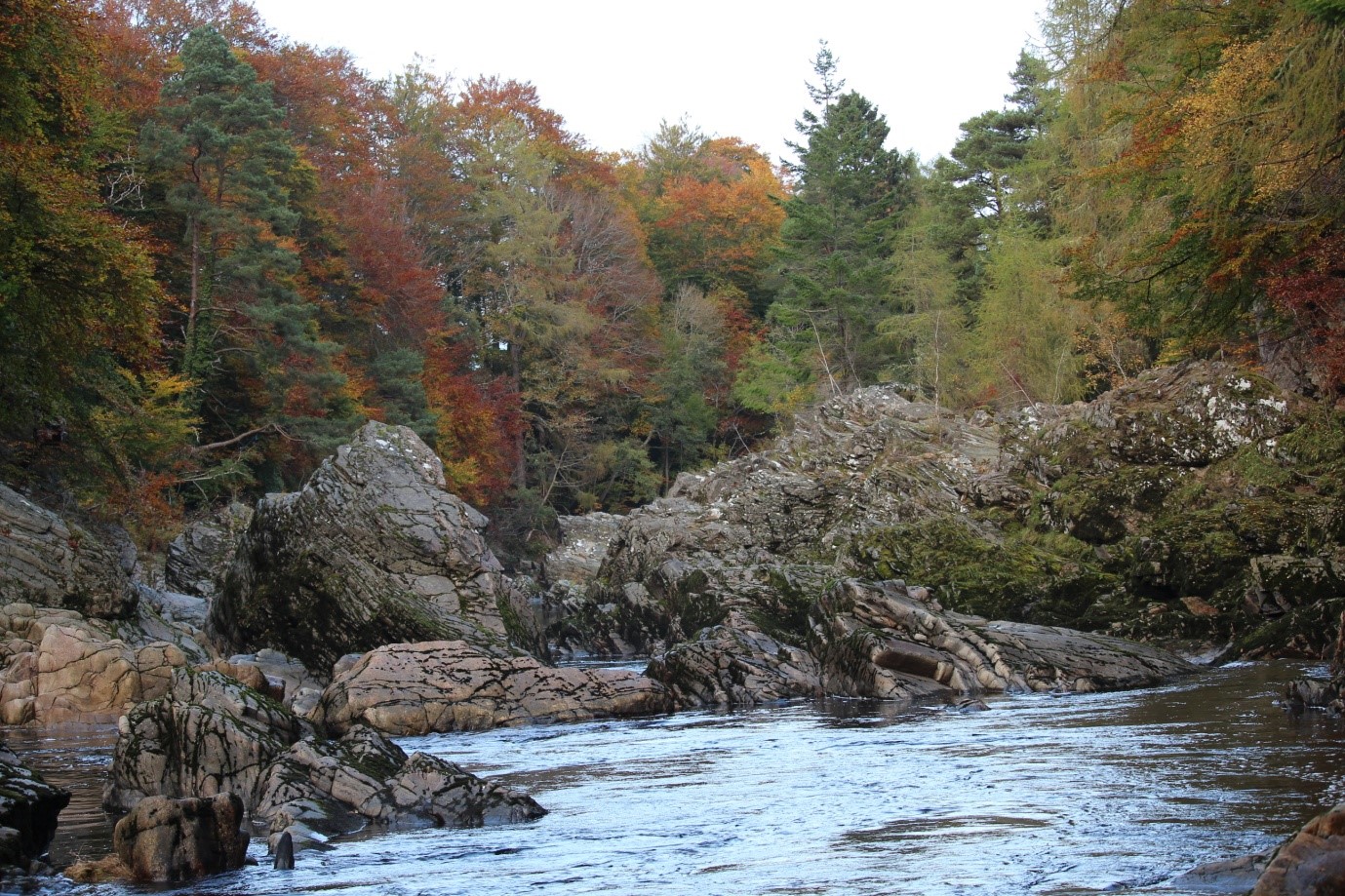 Autumn in the Highlands…

Well, it may be November but as far as Bloggy is concerned it is still October. Why? Well for two reasons. One the weather in October was yet again amazing and two we promised to write once a month and so here we are! So October shenanigans and autumn in the Highlands here we go.

Apart from the beautiful Autumn weather, the colours of the trees etc have been stunning. One of our favourite places to visit at this time of year is Randolph’s Leap on the River Findhorn.

When our three boys were young we often went there and they loved scampering about on the paths and rocks. It has changed a lot since then as said boys are now 31, 29 and 27 (although still prone to scampering on paths and rocks). The biggest changes are the handrails and safety fencing along the walk and down to the river’s edge. One of these is a chain link attached to the rocks and I’m sure I felt safer in the past finding my own foot and handholds instead of swaying on the edge of a rope! The river is the colour of whisky and is very impressive as it charges through rocks and swirls and froths in pools. The autumn colours are not only reflected in the calmer pools but are all around, on the trees and wreathed at the sides of the paths. This isn’t only at Randolph’s Leap, all over the Highlands we have vibrant displays from the trees before they lose their finery and get ready for their winter wardrobe. 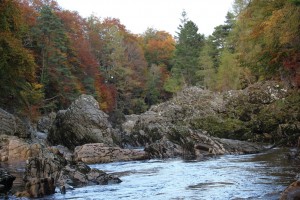 Before we leave Randolph’s Leap it goes without saying that no visit is complete without a stop at Logie Steading for coffee and cake and a browse in the superb book shop.  So much to see there it will keep you out of mischief for hours!

Now that Bloggy is past the crawling stage and has managed to get firmly on its feet it will take you on a tour of our own woods as we tempt you with some exciting future developments at the Lodges. We’ve had a visit from a well known landscape designer and plans are afoot to upgrade the landscape around the Lodges with new trees, shrubs, hedging and even some fruit bushes if you fancy making a bramble crumble during your stay!

So watch this space, as next week we hope to start digging, planting, strimming and tidying up in preparation for 2017. A few surprises are in store.

Halloween past quietly this year with friends preferring to take their ‘guisers’ to organised parties as opposed to when we were young and walked around the houses, mostly unaccompanied by adults. Although the supermarkets were full of pumpkins, there are still a few folks who prefer to carve out a turnip and make a ‘neepy lantern’ to set on your doorstep or carry as a light. It’s a hard job to carve it out but well worth the effort and very traditional. So we still have guising and neepy lanterns despite ‘trick or treat’ and pumpkins trying to muscle in!!!

Our last sail of 2016, allowed a wonderful opportunity to photograph various views from the Moray Firth, from fat little eider ducks (who looked like flying haggis) to oil platforms waiting for repairs and refits. From wind generators up on the hills to yacht masts down in the harbour. From well known landmarks like the Nairn Bandstand to the skyline of the town with its many church spires. People and dogs enjoying some late sunshine on the beach and not forgetting ‘skipper’ with his feet up whilst the lowly cabin girl has a steady hand on the helm. Ah, there’s a lesson there somewhere!

Why not check out our facebook page for all these images and lots more coming onto the Lodges at the Mains website soon.

So on that note I’ll sign off for October and look out the woolly hat, gloves and scarf as no doubt there will be a dusting of snow around the hills for Bloggy’s next report.